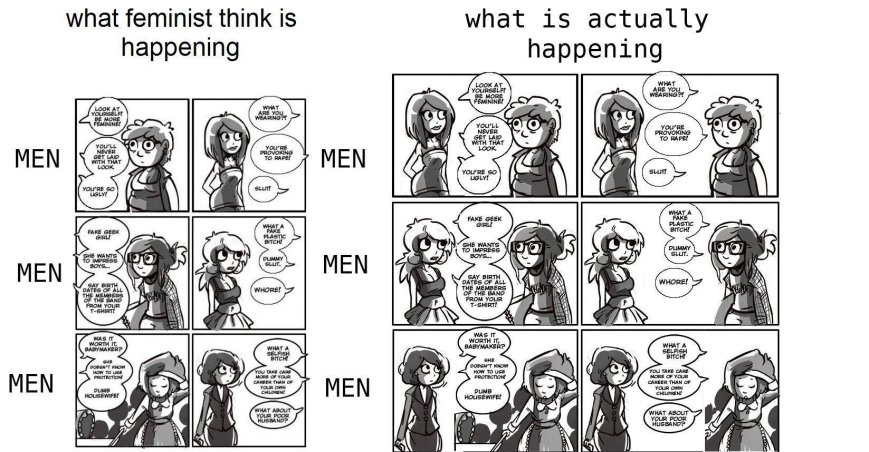 My dislikes of women has only to do with what I refuse to see or accept in myself as a woman. To work toward equal ground, and celebrate the differences among us and the talents between us, depends primarily how comfortable I am as a woman in my skin. I project my fear of not meeting the survival of the fittest standard by asserting strong likes or dislikes. This counters the very essence of feminism: women accepting the equality of others despite our differences.

Now this goes the same for those women who wield their hatred against me – brandishing your judgment like frogs shooting out your mouth, into the air either as a casual quip, or out-and-out calculated aggression. Such testy rivalries only serve to reinforce how feminism is a dirty word – something truly illusory and unrealistic as women can’t seem to exist on an equal plane among themselves. Such competition among women, tearing down others whom they have declared unfit, reinforces a standard, or rather a cloaked perception, around a patriarchal notion of right and wrong.

For my feminism, I too easily have experienced that uncomfortable act of trashing another woman. My aggression, internalized by patriarchal tendencies, consciously and unconsciously acts in ways to seek approval by men as the right move. In my youth, I reinforced division by dressing like a man, seeking androgyny, spouting thoughts in hard language or aggressive tones. All this showmanship co-opted a belief of womanhood that purposefully created a division among women because it made me feel powerful in a powerless position. Working among men who only feel safe around women who don’t challenge them helps to pit groups or women against other women because they are establishing the norms of a woman’s right or wrong view. All who reinforce that kind of subjective selection are complicit in allowing men to dictate the norms of womanhood.

This marginalization of women reinforces the growing popularity of anti-feminism. When women co-opt competing womanhood by judging other women’s level of femininity, belief systems or choices – too fat or slim, tall or short, sexy or bullish – women lose their ability to have feminism as a tool toward a true condition of equality.

We have a tremendous capacity for change. So stop it ladies and grow the fuck up – take a good look in the mirror and accept your part in the process of shaming others whose politics, lifestyle or preferences are different from yours. Don’t judge based on age, or size or the power of some singular talent – embrace feminism and see beneath the veneer of your materialism that although gains in access for women exist, we are still operating in a privileged patriarchy.